“I will only invest in this company if Robin stays a part of it.” Peter Jones – BBC Dragons’ Den.

“I met Robin first in a shop in June 2007, within just nine hours I was enthralled with his infectious enthusiasm and thought processes that I had to get him involved with my ideas. His boundless energy and ability to think ‘Out of the Box’ really helped me see ‘Inside the Box’ with the Tiny Box Company! I have to truthfully say that I may have lost a business partner, but I have gained a surrogate brother and friend for life.” Rachel Watkyn – Tiny Box Company MD.

Whenever I meet anybody, be it in a radio situation or even just walking my dog in the park (!) I am sometimes asked about Dragons’ Den and the real story behind getting investment from Peter Jones and Theo Paphitis. Well here it is from the horses mouth so to speak; 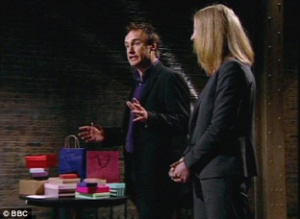 I had no notion of getting back into radio when I returned from Rehab late June 2007 as I had a bad track record (off-air mostly, apart from my 1 hour stint at Galaxy in Manchester – I have since apologised to James Brown, the PC about my atrocious behaviour that day, but it will probably take a lot more!). So I decided to remortgage my house and with the proceeds live off that for a year and do, I hoped, charity work. At this point I had no idea what I would do at all and I was willing to do anything.

I met Rachel Watkyn in a shop in East Grinstead when I was, believe it or not, looking to buy a box!! Not any old box… I wanted one that I could use as a coffee table. Funny how the universe/karma/God works… as within 9 hours I owned half a freekin’ Box Company! I was told in Rehab’; “be careful what you ask for because you will get it”, I had no idea what was meant by that statement until that point. I helped Rachel Watkyn set up Tiny Box Company and Tiny Difference in June 2007.

I had never worked in anything but radio and it showed!, but I decided to use my ‘radio tricks’ with these new companies, I helped Rachel with everything that I could with a keen interest in the PR of the  Tiny Box Company. We were a brand new Packaging Company and who is going to give  column inches to that? So, with zero budget I set about getting our name out there. Any Google search on ‘Rachel Watkyn’ and/or ‘Tiny Box Company will throw up my results.

After about 6 months of setting up the company I decided it would be a good idea to try Dragons’ Den in order to allow us to expand our “Tiny” company and most of all put us in front of 4 million people on BBC2.  Good idea….except I didn’t tell Rachel! The first she knew was when we got a call from the BBC researchers asking what we would do with the money.

We desperately needed funds though as we had grown so rapidly, we had to finance more stock. We had started off with one small office and had spread over the farm our office was on, to 3 premises.  These still weren’t big enough and we were literally sitting on boxes – you couldn’t get through the office door… In fact my office desk only had room for my laptop… I swear it was like a maze of freekin’ boxes!

So a few months later (we were audiotioned and had a few meetings with the BBC producers) we arrived at the “Dragon” location at about 6:30 in the morning, both of us so nervous we appeared hyper. We sat in the “green room” twitching and fidgeting, waiting to be summoned,  in the meantime helping ourselves to endless cups of tea and chocolate to calm our nerves … great idea as we were both then even more hyper!

So finally we were called to the “Den”.  How terrified were we???!  We walked up those stairs wondering if it was anything like the experience shown on TV. It was x 1000.  The 5 dragons sat there just looking at us, waiting for us to do our pitch.  So we did, and we got well and truly slayed!  We were in front of the Dragons for over an hour and a half… although this was edited to what you saw on the TV show, about 7 minutes!! Anyway, both of us thought we had completely blown it, as apparently Rachel was on ‘a crusade’ and my admission to being in rehab’ was met with less than sympathy to say the least.

After about 20 minutes of questioning, our hearts just sank as some of the Dragons were clearly unimpressed.  Duncan Bannatyne in particular, who had for the previous 20 minutes been picking at the paper on the box sample he had, then announced that the paper was peeling off!  Me and Rachel stood there in disbelief. Any paper product if picked at for that length of time would not withstand being torn. They actually cut out the argument I had with Duncan about this! Cheeky BBC. So we were ready to leave the Den dejected.

Peter Jones had not said a thing up to this point, and suddenly threw us a life line, but only if Theo joined him.  The BBC then “ran out of film” (is this possible in the digital age? Or maybe a break to consider? Who knows?), so asked for a short break.  Me and Rachel retreated to the back of the room and saw Theo shaking his head at Peter. Could our hearts sink much deeper? We felt even more dejected and then just waited for the film to be replaced (!!??) and then for us to be expelled from the Den.

And then I declared at that point (my timing is always spot on!!) that my passion was not in ‘boxes’ but in broadcasting. I was at that time negotiating a contract with Colin Paterson, the then PC at Leicester Sound… Rachel was the one in fact that put the idea in my head of getting back into broadcasting some time earlier as I was helping her sister with her Media Degree and she said, “… you are so passionate about radio and not about these boxes… you really should follow your heart and try to get back on the radio”.

Right up until Dragons’ Den Rachel knew everything that I was doing and was not hidden from her in any way. Anyway I digress…

We came out of the Den absolutely stunned.  All the BBC crew were congratulating us, but it just wouldn’t sink in that we had 2 dragons on board – and with more money than we asked for to boot.

So what happened next ?

We went to London to meet all of Theo’s team and Peter’s team to work out the way forward.  They were all lovely (especially Peter!) and we have since moved to much bigger premises, expanding our stock range to include 100% recycled wrapping paper, pillow boxes, mailing boxes and bigger square gift boxes.  We are also updating our printing facilities and on recruitment drive for people who can actually cope with working in the “tiny” offices! We have a regular flow of communication between our office and Peter’s and Theo’s offices and it’s great because if there is any business decision now that we are unsure of, then we can just pick up the phone.

As far as my connection with the company is involved, well I gave Rachel back a large chunk as I thought it was only fair… as I mentioned earlier ‘the universe/karma/God’ gave it to me when I needed something and now it had served it’s purpose. In fact myself and Rachel had a kind of ‘reverse argument’ because I wanted to completely give back all my shares to her and walk away with nothing, she insisted that I remain a part of the company… I am to this day a small shareholder in the company that I helped Rachel setup; the UK’s first sole Eco-Friendly packaging company. I helped start the Tiny Box Company and I am so proud of Rachel and all the staff there now they are doing a fantastic job.

Oh, by the way Rachel’s sister got a 1st in her degree!

And for the record… When I mention ‘the universe/karma/God’, I mean it in a completely non-freaky and non-cultish way!!

Developed by Plastic Box in Berkshire